Audiovisual installations in the ESIC building

In the new ESIC building in Pozuelo de Alarcón, different audiovisual installations have been carried out for different purposes throughout the building. The installations include:

The building is equipped with a digital signage system to display relevant information to students and university staff. The CMS used for this occasion is Deneva through which the content is distributed to these screens. The signage system consists of two 86" screens located next to the auditorium doors in the Entrance Hall, which also serve to show people passing through the Hall what is happening in the auditorium when necessary, four 65" screens placed with Back to Back supports in a "V" shape in the waiting area of the Hall, two 55" interactive touch screens, a 55" screen at the cafeteria entrance and five 55" screens in the canteen. In addition, 32" monitors have been installed vertically at the entrances to the lifts and in each of the corridors leading to the classrooms in the centre, for a total of 19 screens. Finally, next to the entrance door to the building, a high brightness LED screen with 2.9 mm pixel pitch from Absen has been installed in the entrance hall. The screen measures 5 x 2 m and has a total resolution of 1680 x 672 pixels.

To provide information to students about the class that is being taught in each of the classrooms, in the event that a class is scheduled, including information about the class, the teacher who is teaching it, etc. A room booking system linked to the university's Exchange calendar has been installed. The installation includes 7" and 10" Crestron room reservation panels, making a total of 57 touch panels.

Given the exceptional situation we have experienced over the past two years in which the covid-19 has changed the way we work and study, ESIC has opted to equip its classrooms for hybrid teaching. TRISON has equipped all the classrooms in the building with audio-visual equipment so that students can attend classes both in person and remotely via platforms such as Zoom. In the building there are three different types of classrooms in which ESIC has managed to maintain a similar configuration in all of them to facilitate their use by teachers, making small modifications to the equipment depending on the physical distribution of the spaces:

Simple Classrooms: These are the smallest classrooms, they can accommodate up to 40 students, in the building there are a total of 21 classrooms of this type, they are equipped with an 86" LG touch screen monitor, with an OPS computer designed by ESIC, a 55" LG screen at the back of the class so that the teacher can see the students accessing remotely, a 4K Logitech camera has been attached to this screen to send the image of the teacher and the touch screen monitor to the students remotely, it has two Monacor omnidirectional ambient microphones located at specific points in the classroom to capture the teacher's explanations and the questions that the students who are in the classroom can ask, it also has a connector on the teacher's table to be able to connect the teacher's lapel microphone,

Finally, each of these classrooms is controlled through a Crestron button panel, from which you can turn on, turn off and control volumes, as well as restart the docking station locally if necessary.

As mentioned in the previous point, we have tried to make the classrooms as similar as possible to each other, so when the double classroom is functioning as two small classrooms, the equipment and functionality is the same as that of a single classroom, with the difference that instead of having a single monitor so that the teacher can see the students remotely, there are two 55" monitors located at the back of the room at each end.

Minor Classrooms: This is a special type of classroom, where the students sit in semi-amphitheatre mode around the two 86" touch screens located in the classroom, one of these screens is equipped, like the rest of the interactive screens in the classrooms, with an OPS computer, In this case, the screens are interconnected, so that the computer has a duplicated screen and receives the touch interface of the slave screen, so that the teacher can give the class keeping the information he wants to show on both monitors and interacting with it from any of them.

Like the rest of the classrooms, they have a public address and microphone system, a reinforcement screen at the back of the classroom so that the teacher can see the students attending remotely and a control button panel. There are a total of 6 classrooms of this type at the university.

Offices and dining rooms: Throughout the building there are different offices and meeting rooms that require audiovisual equipment. ESIC has equipped some of these rooms with fixed equipment, so that the room always has audiovisual support, but to give more versatility to the spaces, some offices and meeting rooms are equipped with itinerant material, so that they can be easily moved from one room to another depending on the needs of the attendees:

Meeting rooms: Two audiovisual trolleys have been prepared that integrate a 65" LG interactive monitor with an OPS computer located on a mobile trolley with wheels of the B-TECH brand, given that the computer is integrated in the interactive monitor, it is autonomous and can be easily moved between the different rooms of the building.

Small group work rooms: four mobile trolleys similar to those in the two previous types of rooms have been provided.

General manager's office: this office has been equipped with fixed equipment with an 86" interactive screen with integrated OPS computer. In addition, to cover the needs of this office, a Baro wireless presenter and a videoconference bar with camera, microphone and Bose loudspeakers have been integrated.

Dining rooms: Within the cafeteria there are two private dining rooms, the small dining room has been equipped with a 65" interactive screen with an OPS computer and the large office has a similar 86" monitor.

This is a multidisciplinary space within the building, to achieve the versatility of the room, it has been equipped with an LG LED screen with a pixel pitch of 1.56 mn, dimensions of 4800 x 1350 mm and a total resolution of 3072 x 864 pixels, to achieve a screen where to distribute two 16: 9 of 1536 x 864 pixels, it has a room computer that serves the main screen and the 55" reinforcement screen located in front of the speaker, it is also equipped with a public address system with two Bose speakers, a Barco wireless presentation system, two Monacor ambient microphones, an Extron mixer and a Behringer USB interface like the other classrooms in the building, all controlled through a Crestron button panel.

The space with the largest audiovisual equipment in the building is the auditorium located on the ground floor of the university, this space is equipped with a main modular LED screen with a pixel pitch of 2.5 mm of the Absen brand with dimensions of 13.5 x 2.5 m and a total resolution of 5400 x 1000 pixels, this means that the screen can be divided into three 16:9 screens of 1800 x 1000 pixels.

The space has a retractable speakers' table under the stage, when the table is in use, a LED screen with the same pixel pitch as the main screen has been integrated in the front skirt with dimensions of 5 x 0.5 m and a total resolution of 2000 x 200 pixels. To service these screens, a Nexcommunity media server is used, which has two video capturers with a total of two UHD captures (3840 x 2160 pixels) and two FullHD captures. This allows you to configure different layouts on the main screen, from sending a video to the total screen with its resolution, to compose three 16:9 signals to reach the total size of the screen with any of the sources that are in the auditorium.

For video capture, 3 Panasonic HE-40H cameras have been placed, two of them located on the ceiling of the auditorium stalls to capture the stage and one at the back of the stage above the main LED screen to capture the audience. In addition, there are different HDMI inputs on the speakers' table and there are two connection boxes on the stage stairs that can be used to capture signals via 3G-SDI for the possible sending of camera signals that could be placed on the stalls.

The auditorium PA system consists of 6 Bose ME-12 columns and two Bose MB210 subwoofers. All the amplification and processing for the PA system is done through Bose Powermatch amplifiers and two ControlSpace EX1280-C processors of the same brand, one is located in the control room and the other on the stage, the distribution of signals between them is done through DANTE protocol, for the mixing of all the audio signals a Yamaha TF-1 mixing desk is used, also integrated through DANTE protocol. To complete all the auditorium equipment, a Crestron Airmedia wireless presentation system and a unified communications system of the same brand have been installed. All the auditorium equipment can be operated through a user interface installed in the control and speakers' table via a Crestron control system. 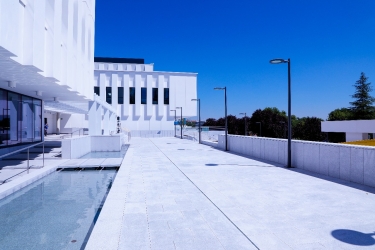 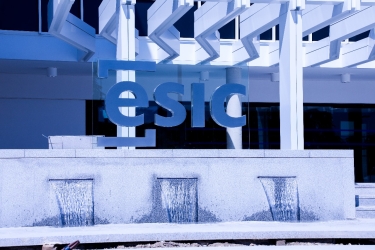 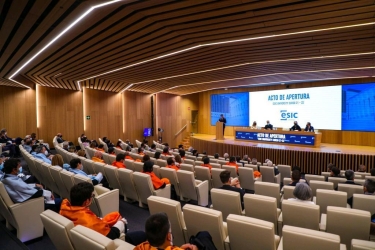 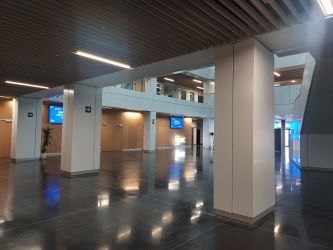 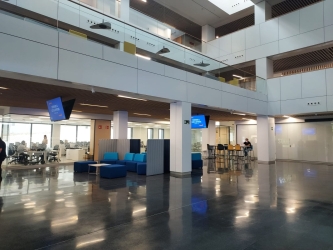