Riazor Stadium is a Spanish sports stadium, located in the city of A Coruña, in Galicia, next to Riazor beach. It hosts the home matches of the first team of Real Club Deportivo de La Coruña.

TRISON has been in charge of installing two LED screens of 120 square metres each that will crown the stadium's backdrops, which will act as scoreboards and different visual contents.

The screens bathe the stadium in light and colour, with nearly one million LEDs with an intensity of 9,000 lumens so that no fan can miss the best play.

For the installation, specially designed structure has been built to adapt to the characteristics of the stadium, so that they are integrated into the last central rows of each of the upper tiers.

With this installation, TRISON has made Riazor Stadium the first stadium in the Spanish Football League to have scoreboards on this scale. 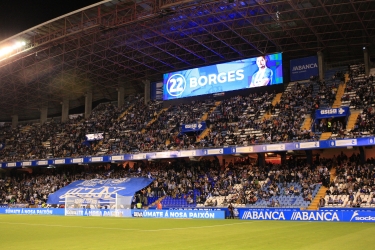